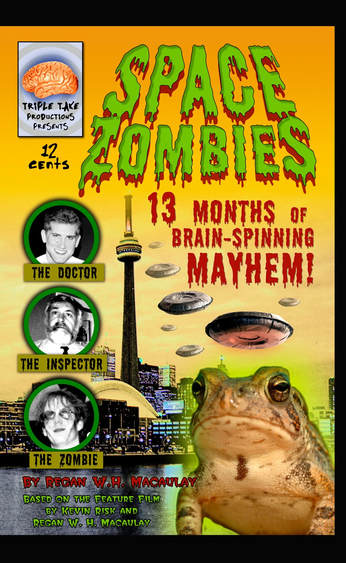 BOOK 1 in the Trilogy of Horrifically Half-baked Ham:  "Space Zombies!" is the novelette based on the B-movie parody feature film "Space Zombies: 13 Months of Brain-Spinning Mayhem!" by Kevin Risk and Regan W. H. Macaulay.

Even the sanest and kindest of men goes mad. But what is it that drives him to insanity? Zombies from space seeking human brains for snacks? Human-to-cat, cat-to-human thought essence switches? Monster toad-beasts or starfish mutations? Dueling heads? What you are about to read is a description of the circumstances under which one man, veterinarian Dr. Vic McNaughton, goes horribly, horribly, and almost irretrievably insane.

Do take a look at the Prologue and Chapter 1, available in the archives.

Check out this GREAT review of the novelette adaptation, "Space Zombies!"

As a science fiction B-movie fan, I was excited to read a novel version of a zombie film. Space Zombies! did not disappoint me. Now I want to see the movie. I found Macaulay’s story hilarious. What isn’t campy and over-the-top about it? Everything lives up to what science fiction B-movie aficionados will easily recognize as the glory of the ludicrous. The premise, characters and parts of speech are all genuine ‘camp’: “He withdrew a weird ray-gun thingy from under his long, black cloak” (24). I adored the way the humans never noticed a zombie clumping around, making obvious noise, until it was too late. It is so entertaining that the zombies want to merge with the superior cat species and not even waste time eating human brains, however delectable they may be. Ju-jube has convincing cat thoughts and the pussy jokes are exactly where they should be. I loved the impending end of civilization symbolized in the clash of the giant toad and the giant starfish. From the cover art of the book showing a “12 cents” price and all the wonderful elements of campy art on both back and front, I truly found this book to be brilliant. It should be sold in every joke and trinket shop on America’s coastlines, preferably with an option to buy the DVD at the same time. . . -- Judge, 23rd Annual Writer's Digest Self-Published Book Awards

AND LET'S NOT FORGET THE DVD - $20.00 CAD, shipping and handling included! 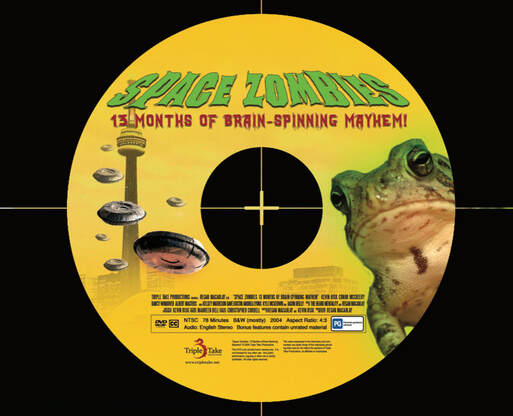 And check out this review of the movie and book by Adam Thorn of Riot at the Movies:

Space Zombies (2004) In the way of The Lost Skeleton of Cadavar or Frankenstein vs the Creature of Blood Cove OR a less offensive Inhumanwich. Comical flash back to the old school B movie cheese of Ed Wood or William Castle or even K Gordon Murray. For the horror host fan base or old school MST3K people it will be right up their alley. For some of my heavy metal gore-hound homies it may seem a tad too cheesy but then again those guys don't watch the things I referenced. Very innocent humor with over acting on purpose to homage the obviously original cheese of its inspirational material. As most fans of these 50s 60s sci-fi they start off with direct Plan Nine from Outer Space spoofing into Cat women of the moon but I give them kudos for heavily spoof the often over looked king of cheese the Atomic Brain (a really bizarre story in the midst of the brain transplant sci-fi craze). Extra kudos to the actors that do not over play it but just let the purposefully bad script guide into silliness like the sheriff character, the brainless Miss Smith that pats her cat constantly. Director Regan Macaulay also plays a cat person and sells it my being completely void of any emotion. I've met her in person and this is the only reason I can tell she was acting, so yes she is not a robot but plays one well. If its your flavor cheese or not you must give points to the book adaption that is extra funny if you read the book thinking its about a film that doesn't exist. But you still need the DVD companion id for nothing else but the extra feature that is an interview with all the cats that appear in the movie. We all love cats right? So does old school cheesy sci-fi. Regan said they filmed in a vets office that she worked at and perhaps this movie may be the reason she no longer works there. Now available for rent at Eyesore so go check it out for a good laugh for you space cadets out there. PS pie plate flying saucers are impressive when you think Ed Wood didn't do it any better and he was trying.

Or perhaps you'd like the book AND the DVD! Only $25.00 CAD, shipping and handling included!

A BIT ABOUT THE MOVIE, SPACE ZOMBIES: 13 MONTHS OF BRAIN-SPINNING MAYHEM!:
Space Zombies: 13 Months of Brain-Spinning Mayhem! is a feature film shot on digital video that pays homage to B-Movies of the 50s, 60s and 70s – in particular the films of Edward D. Wood Jr.  Though unintentional, the idiosyncrasies and errors that go into these ‘terrible’ but endearing and highly enjoyable films have created a style and a cult following.  It was the filmmakers’ desire to delve deeper into this style through the making of a parody film that emulates B-Movies down to the last detail, but within a modern context, as if created today.  The result is a hilarious film study, both entertaining and enlightening.  There is a definite art to creating something ‘bad’, particularly if you are doing it on purpose!

Want the full Trilogy of Horrifically Half-baked Ham (Space Zombies, They Suck and Horror at Terror Creek)? It's only $40 CAD, shipping and handling included!