Alfie, Raxl, Tubson and Oliver have formed a rock band.  They're musical dogs!  Trying to get respect in the human indie music industry of Toronto isn't going to be easy, but it's what Alfie dreams of.  Oh, and there's this girl...and she's not like the other dogs...in fact, she's not a dog at all.

The characters are all based on dogs, cats, and other pets that I know and/or have worked with in the pet industry.  Maybe you'll even recognize one (or more) of them!

For now, I'm getting the picture book Dog Band out there first. In future, I hope to develop the rest of the story into a comic book format aimed at older readers. I won't likely be the one illustrating as I had originally planned, but I have some sketches started on which the artwork can be based. 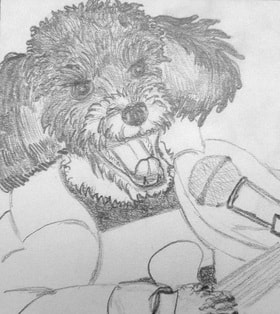