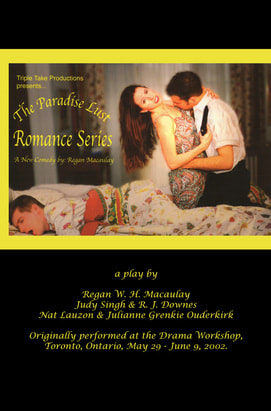 Co-written with Judy Singh, RJ Downes, Nat Lauzon, and Julianne Grenkie Ouderkirk
This play came together one act at a time.  The first act was a writing assignment in my first year at Ryerson University's Radio and Television Arts Program (and as an assignment it was a radio play before we expanded it and produced it as a one-act).  I co-wrote the play with Julianne Grenkie, Nat Lauzon, and Judy Singh.  I attempted a second-act (as a separate one-act play), co-writing with Judy Singh, and entered it into a 24-hour playwrighting competition.  The revised version became act two.  I needed a third act, so R.J. Downes and I wrote that.  Last year, I revised the first two acts and rewrote the last half of the third act.

Synopsis:  (Comedy, with a dash of fantasy) A frustrated writer interacts with the characters in her head and from her romance novel series in order to overcome her writer’s block. After successfully jumping that hurtle, the characters decide that it’s time for their writer to move on to other genres. Finally, it’s the writer who determines her destiny, with the help of her characters, grows beyond herself.